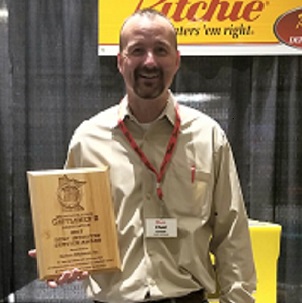 The 2017 recipient of the Minnesota Beef Industry Service Award, Carlson Wholesale, started in January 1970 by Vernon Carlson. At the time the company was known as R&B Distributing with facilities in Rochester, Minnesota. R&B Distributing was formed to fill a need for the distribution, to dealers, of the Ritchie line of automatic livestock fountains serving the Southeastern corner of Minnesota.  In January of 1979 R&B Distributing expanded its territory by adding the East Central and Northeastern areas of Minnesota to its coverage area. At that time an office/warehouse was opened in St. Cloud, Minnesota in addition to the Rochester location. With the opening of the St. Cloud location Tim Carlson was brought on board to handle that branch and in July of 1979 Carlson Wholesale, Inc. was formed and purchased all of the assets of R&B Distributing.  Over the years Carlson Wholesale has added various product lines, in addition to Ritchie, to offer the dealer network. With the addition of other product lines came the need for further family involvement. In 1996 Chad Carlson was brought on board to take care of further sales efforts including dealer support, trade shows and customer education.

When asked how they feel their company helps benefit cattlemen, they stated,

“By offering the highest Quality products and service at a r easonable price.”

Their continued goal for cattle producers is to help them stay profitable by keeping input prices as low as possible while still maintaining quality.